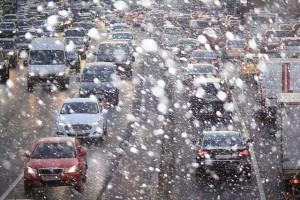 Winter is lovely. There’s nothing quite like a graceful snowfall and the views it creates. However, this beautiful snow also causes a significant number of vehicle accidents to occur. Whether inhibiting a driver’s visibility or causing surfaces to become slippery, snow – along with freezing rain and sleet – can contribute to or directly cause accidents to happen in the blink of an eye.
Nevertheless, with extra caution, along with an awareness of common dangers, accidents are often preventable. Below, discover the most common causes of vehicular accidents in the wintertime – and what you can do to prevent them.

Many people from the West Coast are unaware of black ice. “Black ice” isn’t really black in color. It’s actually transparent, and so it appears black when on asphalt and often merely makes the ground look wet. Because it is so difficult to detect, it causes a great many accidents during winter.
Black ice typically forms when the ground’s cold temperature causes precipitation to freeze on the ground on contact, though it can also come about when sleet or snow refreezes after thawing.
After detecting black ice, do NOT turn the tires of the car drastically, no matter how strong the impulse to do so. This can cause the vehicle to go out of control. In general, if the outdoor air temperature has been fluctuating around or below 32 degrees Fahrenheit, drive more cautiously than usual.

Snow, sleet, fog and wind can all create poor visibility. On top of that, the holidays are a prime time for people to travel. Everyone is out and about shopping and driving to friends’ and family members’ houses. Yet, when there are so many people on the road in these conditions, there are bound to be collisions.
In addition, small inanimate objects – such as fire hydrants – can become buried by snow, and it can be hard to gauge where the road is when it’s covered.
It’s important, in these conditions, to drive defensively. Take note that, just because you can see other drivers, this doesn’t mean that everyone will see you. Along with putting on a defensive mindset, you should also always:

Sadly, drunk driving is common during the holidays. People don’t typically set out to drink and drive, but their thinking becomes impaired once they become intoxicated, and they believe they’re functioning fine even when their responses become increasingly hindered. This slow response time causes many to get into accidents.
Be aware of drunk drivers by staying aware of what everyone is doing on the road. Pay attention to drivers who weave in and out of their lanes, as well as those who appear to be driving too slowly. Drunk drivers who are trying to be careful often end up driving ten to twenty miles under the speed limit – though, obviously, this doesn’t make it safe for them to be on the road.

If you have been in an accident, it’s vital to speak to an attorney who can help discover the facts of your case and seek compensation for your damages. Call David Van Sant today at 770-886-9199 to schedule your consultation, or contact us online.