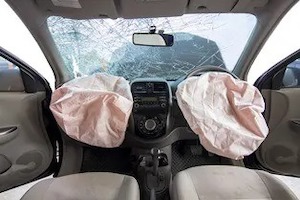 Airbags were introduced in the 1980s. Since 1999, they’re a requirement in all new passenger vehicles. They’re one of the most significant automotive safety innovations implemented in recent decades, credited with preventing tens of thousands of crash-related deaths. In fact, according to the National Highway Traffic Safety Administration, frontal airbags alone are estimated to have saved more than 50,450 lives — enough to fill a major league baseball stadium—from 1987 to 2017.

However, in some cases, these essential safety devices cause serious injuries rather than prevent them. Although some airbag injuries heal with time and treatment, others result in devastating scarring or disfigurement that can negatively affect employment, relationship prospects, self-esteem, mental health, and enjoyment of life.

If you sustained substantial scarring or disfiguring injuries in a Georgia car accident, you may be entitled to compensation. Here’s what you need to know if you’re considering taking legal action.

To understand how these injuries occur, it helps to first understand where airbags are located and what makes them deploy. Airbags are standard on virtually every passenger car—a frontal airbag in the steering wheel protects the driver, while another in the dashboard protects the front passenger. Some automakers may position additional airbags throughout the vehicle for added protection. Common locations for extra airbags include doors and rear ceiling compartments.

The airbags in your vehicle are connected to crash sensors that are programed to deploy them if the car is involved in a head-on or near head-on collision at speeds greater than approximately 10 mph. The process goes like this: The collision is detected by the airbag sensor, which triggers an igniter to release argon, nitrogen, or a similar gas that causes the airbag to deploy forcefully—and then deflate almost immediately. This all occurs in roughly 1/20th of a second. The speed and force of the deployment, along with the chemical used to induce it (and those created as a byproduct of the chemical reaction), are among the most common causes of disfiguring airbag injuries.

Common airbag injuries that lead to scarring or disfigurement include:

As in any personal injury case, airbag disfigurement victims can seek compensation for damages such as medical expenses, vehicle repair or replacement costs, lost wages, loss of earning capacity, and other accident-related losses. Scarring and disfigurement cases also give special attention to the victim’s claims for pain and suffering damages, which could include:

Not all airbag scarring or disfigurement cases are created equally. Multiple factors will be weighed to determine whether you’re entitled to a settlement or financial award and, if so, what the amount of your recovery should be. These factors can include:

Schedule a Consultation With a Skilled GA Accident Attorney

If you were injured in a Georgia vehicle collision, you should speak with an experienced car accident attorney as soon as possible. Please contact us online, or call our office directly at 855-GA-INJURY or 404-991-5950 to schedule your free consultation.