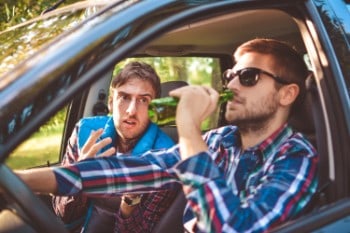 Though careless driving and reckless driving can both lead to accidents, one is considered much more serious in the eyes of the law. In Georgia, reckless driving is a misdemeanor crime that can carry stiff penalties, such as four points on the offending motorist’s driver’s license, a fine of up to $1,000, and up to one year in prison.

If you were injured or suffered other losses in a car accident caused by a reckless driver, you may be entitled to compensation for medical expenses, lost wages, loss of earning capacity, pain and suffering, and other damages. Keep reading to find out how a criminal reckless driving case against the driver who caused your crash can impact your civil personal injury lawsuit, as well as why you should still move forward with your civil case regardless of the outcome of the state’s criminal case.

Georgia law defines reckless driving as “operating any vehicle in a reckless disregard for the safety of persons or property.” The somewhat vague nature of this definition gives law enforcement officers and prosecuting attorneys broad discretion to address any on-the-road behavior that’s considered especially dangerous. Examples of common reckless driving behaviors include:

The decision whether to charge a motorist with reckless driving is often left to the discretion of local law enforcement officers and the district attorney. If they choose to move forward with criminal charges against the reckless driver who caused your accident, it only serves to strengthen your civil claim for damages. Criminal reckless driving charges filed against one party in an accident leaves little question about which party is liable.

Additionally, if the motorist is actually convicted of reckless driving, you may be entitled to punitive damages. Rather than compensating victims for a loss, punitive damages are intended to punish the defendant for particularly heinous conduct and deter others from engaging in similar actions.

Why You Should Still Bring a Civil Personal Injury Lawsuit Against a Reckless Driver, Even if They’ve Already Been Convicted of Criminal Charges

Though a criminal conviction for reckless driving holds the at-fault driver accountable to the criminal justice system, it doesn’t provide compensation to the accident victim. To seek a financial recovery from the reckless driver for injuries and other losses, you’ll have to file a personal injury lawsuit against them in civil court. There, a criminal conviction for reckless driving in the accident in question can go a long way toward proving your claim for damages.

Injured by a reckless driver? You may be entitled to compensation for a wide range of economic and non-economic damages. It’s important to speak with an accident and injury attorney as soon as possible to ensure that you understand your legal rights and options.

The skilled accident and injury attorneys with Van Sant Law have helped countless car crash victims in Metro Atlanta receive the compensation they deserve after being injured by a reckless driver. We may be able to help you, too.

Contact Van Sant Law today to schedule an appointment for a free, no-obligation initial consultation. Don’t wait—Georgia’s statute of limitations law gives you just two years to file a car accident lawsuit. The sooner you contact us, the sooner we can get to work helping you build your case.