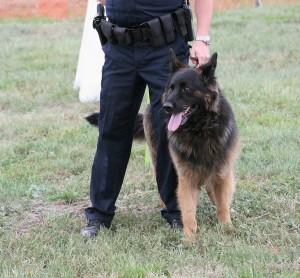 They say a dog is man’s best friend, but some of them rank among our very best protectors too. Police dogs are highly valued members of the police force, given their amazing powers of smell and speed.

But dogs are dogs, and sometimes they’re dangerous. That’s especially true with police dogs, which are trained to track, take down, and corner suspected criminals. Specially trained as they are, police dogs can still be hard to control — on the leash or off.

When a police dog inflicts serious injuries on criminal suspects or even innocent bystanders, the injured may be entitled to compensation under the law. Victims should contact an attorney who has experience with police dog injuries, even if they have been accused or convicted of a crime.

At Van Sant Law, we take injuries from police dogs seriously. The Atlanta personal injury attorneys at our firm understand how to protect your rights against excessive force, including K9 units.

Police Dog Injuries Can Be Severe

Like any other dog attack, encounters with police dogs can result in serious injury. That’s particularly common when the handlers fail to call the K9 off after the suspect has been sufficiently apprehended or the threat of danger has been eliminated. The K9 may also simply ignore its handler or otherwise escape and cause injury.

In some cases, officers have even been known to command dogs to attack the wrong person, either as an accident or out of vindictiveness. Police dogs have also been used as excessive force against suspects who posed no real danger.

The Use of Georgia Police Dogs Is Loosely Regulated

Despite public perception to the contrary, the use of police dogs is not well regulated in Georgia. In fact, while dogs must be officially certified for use in the police force, there are astonishingly few guidelines in place for selecting or training dogs and their handlers. There is also little uniformity from one county or police department to the next about the way police dogs can be used in Georgia.

Nevertheless, K9 units are still subject to rules about excessive force. If police misuse their K9 force, you can fight back with the help of police brutality attorneys in Atlanta.

Can I Sue for Injuries From Police Dogs?

When police officers use excessive force or mishandle K9 units, the officer and/or the department may be liable for police dog injuries.

The law generally allows a police dog to track, bite, and hold a suspect, but the dog and its handler must still act reasonably. When innocent bystanders are inadvertently injured, they may be entitled to financial relief. Likewise, even criminal suspects have rights when unreasonably injured by a police dog.

Because Georgia’s rules for police dog conduct are ambiguous, personal injury cases arising from a police dog bite can be complicated. But an experienced attorney can help you fight for your rights, no matter how complex the case may be.

If you or a loved one has been injured by a police dog in Georgia, the Atlanta personal injury firm of Van Sant Law can help.

We have a thorough understanding of police misconduct law and its application in the K9 context. Our talented legal team will put its knowledge and skill to work for you and fight for the justice you deserve.

To schedule a free and confidential consultation with a Georgia police dog injury attorney, call 404-991-5950 or contact us online.