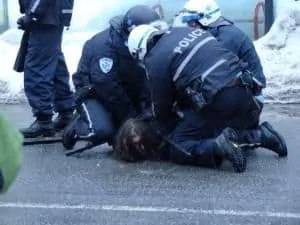 Being arrested is a frightening and traumatic event that is only made much worse when the police act with excessive force or brutality.

Unquestionably, the law enforcement officers in our state have a difficult and dangerous job, and we all want them to have the resources necessary to protect the public. But there are unfortunately some officers who overstep their bounds and act with excessive aggression, force, or violence toward criminal suspects or even innocent bystanders.

At Van Sant Law, we are dedicated to holding police officers accountable when they violate the law. The police may be powerful, but so are your rights. If you’ve been mistreated or injured by law enforcement, an experienced Atlanta police brutality attorney at our firm can help you fight for justice.

What Is Considered Reasonable Force?

Generally speaking, courts in Georgia will consider the specific facts and circumstances of an officer’s use of force to determine whether it was objectively reasonable.

The U.S. Supreme Court has handed down a few factors that courts should consider in making that determination:

The court is also free to consider other factors and circumstances. For instance, some courts have looked at the extent of the injury inflicted upon the suspect, as well as the amount of force used relative to the amount that was warranted. An Atlanta police brutality attorney can help you understand whether police applied objectively reasonable force in your case.

Knowing the Right Questions to Ask

When you meet with an Atlanta police brutality attorney at Van Sant Law, we will ask a series of questions to help us better understand the scenario and determine whether you might have a case.

Some of the questions we are likely to ask include:

These are just a few of the questions we may ask during the course of a consultation. You can start thinking about the answers to these questions now, but you should not assume that they have any bearing on your case until you talk with an attorney.

You Have Legal Protection Against Excessive Force and Police Brutality

Even if you are guilty of a crime, the state and federal Constitutions protect you from excessive force and police brutality. If you’ve sustained injury or damage because an officer acted inappropriately, you may be entitled to financial compensation.

At Van Sant Law, we have successfully represented hundreds of victims of police misconduct. These are people whose lives have changed because we restored justice and recovered compensation on their behalf.

A Law Firm That Fights for Your Rights

The personal injury trial lawyers at Van Sant Law are dedicated to fighting for your rights and standing up against excessive force and police brutality.

Our experienced Georgia personal injury attorneys recover millions of dollars each year on behalf of people who were injured because of someone else’s irresponsible behavior.

If you or a loved one is the victim of excessive force or police brutality, contact Van Sant Law and schedule a free consultation today. Call us at 404-991-5950 or use our convenient online contact form.